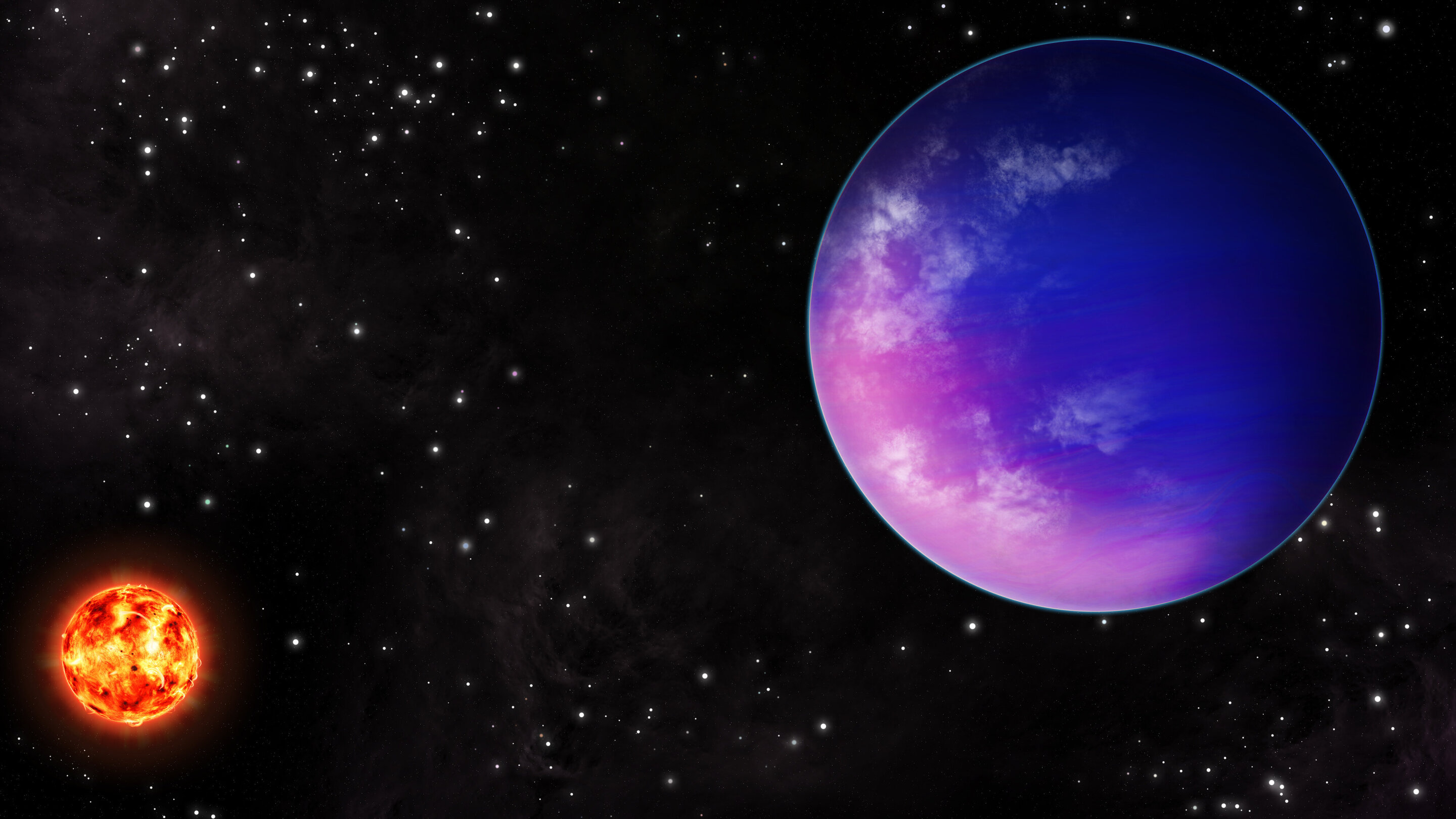 New detailed observations with NSF’s NOIRLab facilities reveal a young exoplanet, orbiting a young star in the Hyades cluster, that is unusually dense for its size and age. Weighing in at 25 Earth-masses, and slightly smaller than Neptune, this exoplanet’s existence is at odds with the predictions of leading planet formation theories.
New observations of the exoplanet, known as K2-25b, made with the WIYN 0.9-meter Telescope at Kitt Peak National Observatory (KPNO), a Program of NSF’s NOIRLab, the Hobby-Eberly Telescope at McDonald Observatory and other facilities, raise new questions about current theories of planet formation. The exoplanet has been found to be unusually dense for its size and ageraising the question of how it came to exist. Details of the findings appear in The Astronomical Journal.
Slightly smaller than Neptune, K2-25b orbits an M-dwarf starthe most common type of star in the galaxyin 3.5 days. The planetary system is a member of the Hyades star cluster, a nearby cluster of young stars in the direction of the constellation Taurus. The system is approximately 600 million years old, and is located about 150 light-years from Earth.
Planets with sizes between those of Earth and Neptune are common companions to stars in the Milky Way, despite the fact that no such planets are found in our Solar System. Understanding how these “sub-Neptune” planets form and evolve is a frontier question in studies of exoplanets.
Astronomers predict that giant planets form by first assembling a modest rock-ice core of 5-10 times the mass of Earth and then enrobing themselves in a massive gaseous envelope hundreds of times the mass of Earth. The result is a gas giant like Jupiter. K2-25b breaks all the rules of this conventional picture: With a mass 25 times that of Earth and modest in size, K2-25b is nearly all core and very little gaseous envelope. These strange properties pose two puzzles for astronomers. First, how did K2-25b assemble such a large core, many times the 5-10 Earth-mass limit predicted by theory? And second, with its high core massand consequent strong gravitational pullhow did it avoid accumulating a significant gaseous envelope?
The team studying K2-25b found the result surprising. “K2-25b is unusual,” said Gudmundur Stefansson, a postdoctoral fellow at Princeton University, who led the research team. According to Stefansson, the exoplanet is smaller in size than Neptune but about 1.5 times more massive. “The planet is dense for its size and age, in contrast to other young, sub-Neptune-sized planets that orbit close to their host star,” said Stefansson. “Usually these worlds are observed to have low densitiesand some even have extended evaporating atmospheres. K2-25b, with the measurements in hand, seems to have a dense core, either rocky or water-rich, with a thin envelope.”
To explore the nature and origin of K2-25b, astronomers determined its mass and density. Although the exoplanet’s size was initially measured with NASA’s Kepler satellite, the size measurement was refined using high-precision measurements from the WIYN 0.9-meter Telescope at KPNO and the 3.5-meter telescope at Apache Point Observatory (APO) in New Mexico. The observations made with these two telescopes took advantage of a simple but effective technique that was developed as part of Stefansson’s doctoral thesis. The technique uses a clever optical component called an Engineered Diffuser, which can be obtained off the shelf for around $500. It spreads out the light from the star to cover more pixels on the camera, allowing the brightness of the star during the planet’s transit to be more accurately measured, and resulting in a higher-precision measurement of the size of the orbiting planet, among other parameters.
“The innovative diffuser allowed us to better define the shape of the transit and thereby further constrain the size, density and composition of the planet,” said Jayadev Rajagopal, an astronomer at NOIRLab who was also involved in the study.
For its low cost, the diffuser delivers an outsized scientific return. “Smaller aperture telescopes, when equipped with state-of-the-art, but inexpensive, equipment can be platforms for high impact science programs,” explains Rajagopal. “Very accurate photometry will be in demand for exploring host stars and planets in tandem with space missions and larger apertures from the ground, and this is an illustration of the role that a modest-sized 0.9-meter telescope can play in that effort.”
Thanks to the observations with the diffusers available on the WIYN 0.9-meter and APO 3.5-meter telescopes, astronomers are now able to predict with greater precision when K2-25b will transit its host star. Whereas before transits could only be predicted with a timing precision of 30-40 minutes, they are now known with a precision of 20 seconds. The improvement is critical to planning follow-up observations with facilities such as the international Gemini Observatory and the James Webb Space Telescope.
Many of the authors of this study are also involved in another exoplanet-hunting project at KPNO: the NEID spectrometer on the WIYN 3.5-meter Telescope. NEID enables astronomers to measure the motion of nearby stars with extreme precisionroughly three times better than the previous generation of state-of-the-art instrumentsallowing them to detect, determine the mass of, and characterize exoplanets as small as Earth.
More information:
The Habitable-zone Planet Finder Reveals A High Mass and a Low Obliquity for the Young Neptune K2-25b, arXiv:2007.12766 [astro-ph.EP] arxiv.org/abs/2007.12766
Provided by
Association of Universities for Research in Astronomy (AURA)
Citation:
Surprisingly dense exoplanet challenges planet formation theories (2020, August 4)
retrieved 4 August 2020
from https://phys.org/news/2020-08-surprisingly-dense-exoplanet-planet-formation.html
This document is subject to copyright. Apart from any fair dealing for the purpose of private study or research, no
part may be reproduced without the written permission. The content is provided for information purposes only.