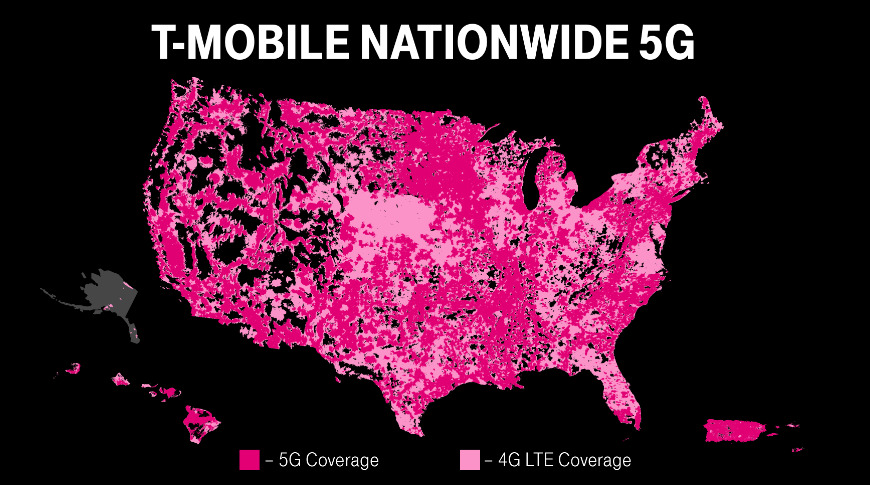 T-Mobile is launching what it is calling a “standalone” 5G network across the U.S. on Tuesday just in time for the “iPhone 12” launch this fall.
Previously, T-Mobile had been leveraging existing LTE architecture to access the 5G spectrum, but with “standalone” architecture, users will now have access to the 600MHz 5G band without the need of LTE networks. The newly-built standalone architecture expands T-Mobile’s 5G network by 30%, according to T-Mobile.
However, the network expansion doesn’t mean that the fastest portions of the network will be universally available. Using sub-6Ghz spectrum, the connections will be robust and wide-spread enough for normal usage, and provide some overall traffic routing benefits, but all markets won’t get the physics-limited mmWave technology that is often the main focus of 5G hype.
After T-Mobile and Sprint merged, the network architecture has been combined to accelerate the expansion of 5G across the country.
“Since Sprint became part of T-Mobile, we’ve been rapidly combining networks for a supercharged Un-carrier while expanding our nationwide 5G footprint, and today we take a massive step into the future with standalone 5G architecture,” said Neville Ray, President of Technology at T-Mobile. “This is where it gets interesting, opening the door for massive innovation in this country — and while the other guys continue to play catch up, we’ll keep growing the world’s most advanced 5G network.”
According to T-Mobile, The first phase of 5G rollout took place using existing LTE architecture, which let users access the core-5G network via mid-range LTE bands. Now that the standalone architecture for 5G is being rolled out, users will be able to experience the 5G network directly via network towers.
T-Mobile says one tower can cover hundreds of square miles with 600MHz 5G speeds. This is critical for use in rural areas such as North Dakota. The service now has 1.3 million square miles of coverage across 7,500 cities.
The launch of a commercial 5G network prior to the “iPhone 12” launch this fall is sure to boost interest in the new lineup. Four new iPhone models are expected with support for 5G.